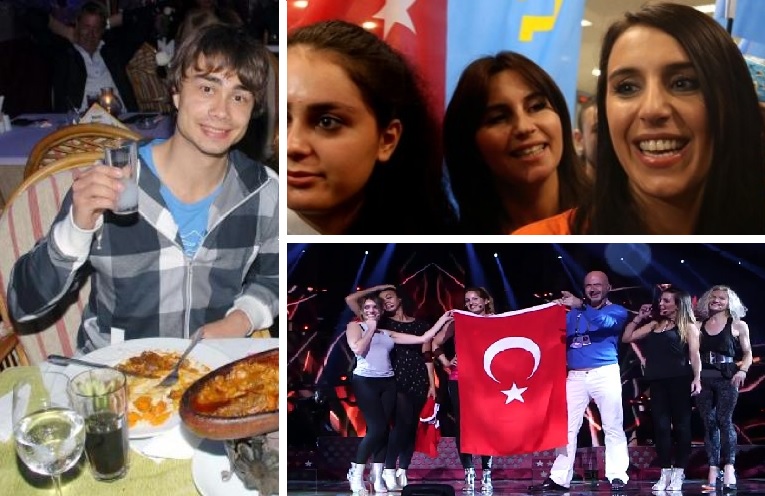 Having first appeared on the Eurovision stage 1975, Turkey has not been participating after TRT’s decision in 2013. Although, this doesn’t mean the following of this tremendous music event has really slowed down in Turkey. Here is the ranking of our top ten favorite Eurovision moments, that brought back a taste of Turkey, in the post-participation years:

1 Point: Turkish Eurofans and Every Way That I Can

In Kiev 2017, during the jury final, Turkish fans were asked to sing a favorite Eurovision song of theirs and non-surprisingly they went with “Every Way That I Can”.

Norwegian Eurovision winner with the song “Fairy Tale”, Alexander Rybak is vocal about his rooting for Turkey’s return to the contest. Alex is known for frequently visiting Turkey. He gets our 2 points.

Belarussian Eurovision hopefuls in 2017 said that their favorite Eurovision song is Deli (Turkey 2007) and they even sang it live in Turkish. That’s why they get our 3 points!

Suzy, who represented Portugal in 2014, sang the Turkish Eurovision song of 2009, Dum Tek Tek, at the Eurofest party in London in 2014 and gets our 4 points!

Did you know that the Finnish Eurovision representative of 2018, Saara Aalto, previously made performances in Turkey and sang Sertab’s famous ballad Soz Bitti in Turkish? She gets our 5 points!

2005 Eurovision Winner and Swedish-Greek Popstar Helena Paparizou recently sang a duet with Turkish popstar Serhat on his hit Total Disguise and she deserves our 6 points for her flawless pronunciation of the Turkish lyrics in the song.

7 Points: Elnur and the Turkish Flag

Azerbaijans 2015 representative Elnur is pretty famous in Turkey as well. He even won The Voice of Turkey and he has shown his appreciation to Turkey by waving Turkish flag in the contest.

Have you heard about the Turkish lyricist of the Belgian song in 2016? Birsen Ucar wrote the lyrics of What’s the Pressure which was sung by Laura Tesoro. Laura is also known for singing Turkey’s 2009 Eurovision hit Dum Tek Tek, which is unsurprisingly from another Belgian-Turkish star, Hadise.

Ukrainian representative in 2016, Jamala, won the contest with a song that was sung half in Tatar, which is a dialect of Turkish. She made the headlines in Turkey following her win, and she even had a fan meet and greet in Istanbul, in addition to singing a duet with the Turkish Eurovision queen Sertab.

Internationally-known Turkish singer Serhat is representing San Marino for the second time in Eurovision this year, in addition to his 2016 bid. We give our max points to Serhat for this honor and excitement.Even though Turkey hasn’t been actively participating in Eurovision since 2013, we are pretty certain the Turkish Eurovision fans won’t be discouraged to follow the contest for many more years to come. We’ll continue highlighting Turkey’s footprint in Eurovision until we actually make a comeback one day!